I ended up sitting outside the hotel with a couple, watching the stream on my tablet and BSing.  Cocktails and beer were flowing, they were from Canton so we had a TON to chat about.

I ended up watching barely nothing of the 4th quarter though it was  in my lap.  The stories from these 2 were amazing and I will relate them sometime soon.

The defense is on pace to score 32 safeties during the regular season.  Should be a good year.

Kinda puts a new spin on "going for two", no?

Did we have an Orlavsky tonight with zero mention????????

I mentioned it in Chat

As long as an Olasvsky gets credit. It's like perfect ahi. Very rare.

For those of you having trouble streaming, the game is on NFL Network tonight at Midnight Lambeau Time (That's 10:00 PM for you West coast fans)

For some reason, Directv is not letting me see the game.  Might be because the previous game, AZ vs OAK, was available locally and the message didn't reset. 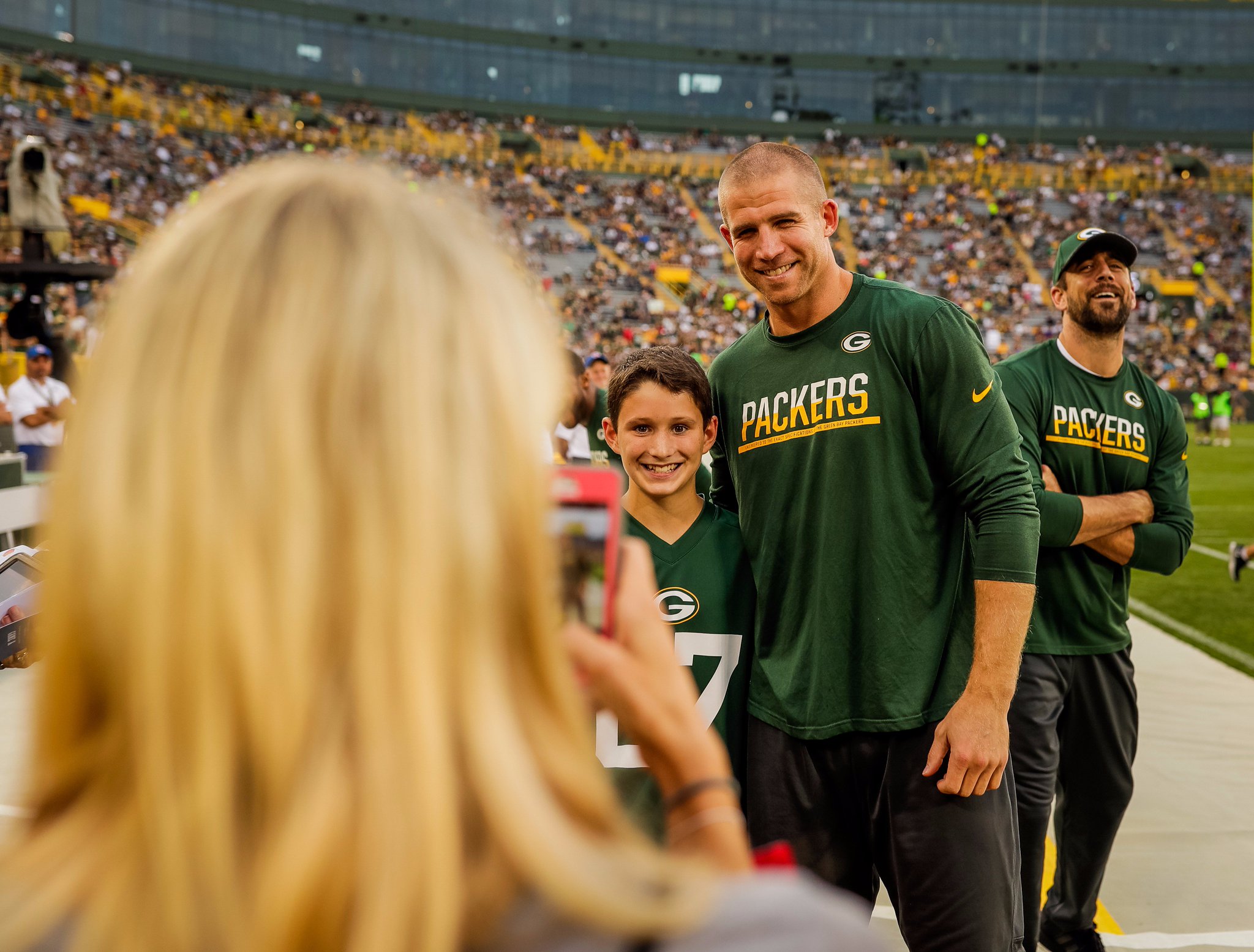 Football is back...photobombs are back!

Season's in the Bag!!

If he gets cut because of an injury it will be Jumanji Rolle on steroids.

The legend will only grow after he makes his first one handed,Hail Mary, game winning catch....

I'm not sure how Barclay makes the roster minus a mass outbreak of leprosy among the starters and rookies.

wait. what?  no Geronimo?

- Ripkowski looked unsure. A lot of dancing and not a lot of hitting.

- Jones looked good at OLB.  We are really deep there and I think Jones and Perry are going to have good years.  If we can hold up against the run on early downs, this D could be really good with a dominate pass rush in front of a good secondary.

- So far I like Williams ahead of the D3 kid for practice squad QB.  He plays with confidence while the D3 kid seems a little timid.  Hopefully for her m he starts letting it go.

- Spriggs didn't embarrass himself.  As advertised he pass blocked well but was meh in the ground game.

FLPacker:  next time please use a larger font-size so we can read your post without squinting!

I was waiting for that, cut & pasted it & didn't know how to reduce it. Plus those of us 55+ probably appreciated it.

It's really screwed up on the mobile version.

I was waiting for that, cut & pasted it & didn't know how to reduce it.

Try this next time:

and  then "Clear Formatting"

He was hell bent on correcting the mistakes from the 2014 NFCCG, and look how that turned out.

I'm not sure how Barclay makes the roster minus a mass outbreak of leprosy among the starters and rookies.

Yep.  I think he's just camp insurance in case injuries hit hard.  Better to have him on the roster at the beginning than scrambling to find someone if it's a week before the season and they all of a sudden need an extra guy.  He also knows the system, knows how they like to practice and is more challenging competition for the young guys than an undrafted free agent.

He'll stay with the Packers if they end up needing him, but most likely end up going to somewhere like Seattle.  He'll be an upgrade there.  Barclay should have a long journeyman career in the NFL like Barbre or Newhouse.

He was hell bent on correcting the mistakes from the 2014 NFCCG, and look how that turned out.

Load up. Keep swinging. It's hard to win a super bowl.

This is a really good roster though.

Like Dave Kingman....keep swinging for the fences. Eventually you connect & hit a grand slam.

Burks and yet another undrafted rookie from a second-tier conference, safety Kentrell Brice of Louisiana Tech (Conference USA), were as impressive as any of the team’s 24 rookies that played Friday night in the 17-11 exhibition victory over the Cleveland Browns at Lambeau Field.

Thought Burks did play well. I've never been all that impressed with Crockett and he may very well be a better option.

I think the defense showed that they're winning the one on ones. The emphasis on playmaking seems to taking hold.

I don't know that anyone played horribly on the DL, but the Browns were rushing for 5+ yards/carry in the first half, and finished at 4.5 yds/carry.
Most blitzes looked like AJ Hawk's. The was some pressure from pass rush, but it was mostly ineffective.
I'm just not ready to say this defense has 'turned the corner', but is much improved. I do remain a bit worried that some of the same tendencies remain from last year (rush defense, explosive plays, missed tackles).
I am excited for our LBs. I think Bradford is ready to play some ball, and Martinez and Fackrell look like the real deal. Position speed is much greater, and that's what we've been missing the last few years.

Same deal for Perillo and Abby on offense. I keep rooting for Janis as much as the next guy, but Abby has left him in his dust.  We really have an embarrassment of riches at TE and WR, and it's almost hard to imagine incorporating all of them into the playbook...until I think of last year and realize it can change in an instant.
Ditto for the OL; we really have some great depth developing. Spriggs debut was solid, I thought Walker can still hold his own at T, and Lane and Rotheram didn't embarrass themselves. Barclay.....well, he's Barclay. Not necessarily good; just good enough. But his experience still gives him an edge that's hard for the younger guys to overcome.
The most impressive thing about Burks to me? Blitz pick-up. That must be the very first thing they teach these guys!

The most impressive thing about Burks to me? Blitz pick-up. That must be the very first thing they teach these guys!

I think TT values that both in drafting and UFDA signings....

Good. Now he can work on his Lambeau Leap. That was pretty pathetic last year.
44 minutes ago

Team makes it official.
47 minutes ago

Just for shits and giggles I went back and looked at the Toronto series and a few things jumped out to me. Van Vleet shot 57% from 3.
59 minutes ago

The Bucks and Raptors series went 6 games. The media narrative has become that the Raptors blew the Bucks out. You know what the overall...
1 hour ago
Receiver is incredibly deep this year, so unless Ruggs falls to them somehow I’m good with waiting on a receiver.
2 hours ago

I thought Wisconsin was playing Notre Dame, but this came out regarding the schedule for next year...
2 hours ago

I guess it would depend on FA activity taking place before the draft. There does not seem to be any attractive options in FA at ILB, so...
2 hours ago

Why would you even think that? If they're not going to pay Martinez why the hell would they bring back Ryan?
3 hours ago

Please don't bring him back.
3 hours ago

Nick Nurse was asked recently what he thought and he gushed about the Bucks and how good and deep they are and with Middleton and DDV...
3 hours ago

That right there is spot on. I could see a scenerio that the Bucks would not only have to battle the Lakers (assuming they get that far)...
3 hours ago

You prioritize WR a lot lower than I do.
4 hours ago