I'm sure he has a life alert.

I've never even heard of this guy.

Biggest issue with him has been health the last 2 years. He had a torn pectoral muscle and I believe and ankle injury causing him to miss most of the last 2 seasons. Prior to that, he was a pretty decent ILB according to reports. When he signed his 4 year deal, here was what was written about him per PFF:

Kirksey has elevated his play in each of his first three seasons and in 2016 he graded as tied for the 22nd best off the ball linebacker with an overall grade of 81.5.

• Kirksey has developed into a dominant force defending the run. In 2016 his run-defense grade of 84.9 ranked fourth among linebackers and his 46 run stops ranked first amongst inside linebackers(A stop is a tackle resulting in an offensive failure).

• In 2016, Kirksey was effective as a pass rusher off blitzes. His pass-rush productivity of 16.0 ranked fifth among inside linebackers with at least 40 pass rush snaps. He produced 16 pressures (two sacks, four hits, ten hurries) on 78 pass rush snaps.

So he'd replace Blake and you still need a guy next to him that can cover.

Let's be honest.  They need about 4 ILBs.

Let's be honest.  They need about 4 ILBs.

Sad but true. Burks has been a complete bust. Can he even be a decent backup?

Oren Burks, Josh Jackson. A couple of fairly high draft picks that a really hard time finding playing time under Pettine. Rashan Gary hopefully doesn't continue to fit in that category in 2020, especially if the Packers are moving on from Fackrell.

If Burks and Jackson are not in the Packers plans in 2020, then cut the dead weight and move on.

Love the pick of Alexander in the first, but beyond that the whole 2018 class is very lackluster (at best).

More accurate picture of the Packers cap situation now that Graham has been released. Just for reference, in 2019 contracts for Z. Smith, P. Smith, and Amos totaled $154M, but the cap hit combined for all three was only $19.15M. Realistically it looks like this space buys us probably 1 Bulaga and maybe 2 mid-tier FA's or 2 upper-tier FA's and some lower tier vets. Could be more if guys like Lane Taylor get chopped. Clark and A. Jones are already under contract, so at worst they're going to get extensions with only some extra in signing bonus charged this year. Wouldn't expect KC to have a cap hit much beyond the $7.6M he already has. 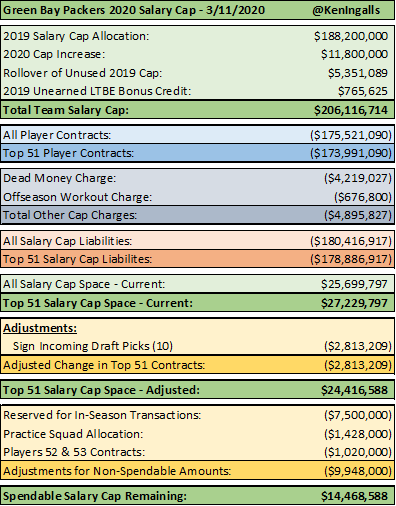 They can also do some trickeration with the cap frontloading a 2 year deal for Boo-lager, but spreading it over 2 years, then next year if they want to move on, it still spreads the cap hit over 2 years...and presumably there will be more cap space in 2021.

I have also heard Duhvante Adams is willing to re-do his deal if needed to free up more cap room in the vent the Packers really want to make a run at a Hooper, Hunter Henry, Robby Anderson level FA.

James Jones predicts Robby Anderson to Packers. Means nothing but a nice thought. But how does he get all that hair under his helmet?

Depends on what $$$ he’s asking for I guess. A fluffy contract that really only hits the team modestly is tolerable, I wouldn’t give that guy anything but a team friendly deal though. At a time when most people don’t want to travel (and probably shouldn’t), Christian Kirksey is continuing his world tour.

According to Ian Rapoport of NFL Network, Kirksey is visiting with the Bills today.

He’d be a solid addition to a team that already has Tremaine Edmunds and Matt Milano at linebacker. They lost Lorenzo Alexander to retirement, and the former Browns linebacker would be a good addition.

He’s previously been to see the Packers and the Raiders, racking up plenty of frequent flier miles in the week before free agency is supposed to start, with other teams interested in him as well.

Maybe, but do you want to pay a part time QB/ILB/WR/STs guy a ton of money to do so, especially considering he's going to be 30 years old this season?

Joseph would be awesome next to KC. Still an elite run stuffer.

Linval in G&G would be a welcomed sight

Stop gap but a good stop gap.  Somebody will throw money at him.

Oren Burks, Josh Jackson. A couple of fairly high draft picks that a really hard time finding playing time under Pettine. Rashan Gary hopefully doesn't continue to fit in that category in 2020, especially if the Packers are moving on from Fackrell.

If Burks and Jackson are not in the Packers plans in 2020, then cut the dead weight and move on.

Just a thought but would it be worth it to just put Burks back at SS position like in college?  It's a bit of weird fit but it's better than nothing.

The thing with Burks seems to be more of a health issue...doesn't matter where you put him if he can't stay on the field.

When he isn't hurt he looks lost at ILB.  So non hurt SS depth is a thought.

For me, hard to say. Rookie year he was dealing with the switch. 2nd year injured and coming back from that.

Not a lot of good data for us civilians to assess.

That and he may be to big and slow for NFL safety position so dumb idea.

I would be happy if he ended up as acceptable depth at this point.