A couple of good articles this week highlighting MLF tweaking his scheme week to week to fit his opponent AND the players he currently has available. An amazing and refreshing change from McCarthy who would continue to roll out the same offense and the same schemes regardless of opponent or personnel available. A remarkable change to have a forward thinking HC.

LaFleur had to decide whether to stick with his wide zone attack or go with one that was better equipped for success against the speedy Cowboys defense. To his credit, he called inside zone runs repeatedly in the early going and made the Cowboys pay for their aggressiveness.

“It was doing kind of what we thought would work,” right tackle Bryan Bulaga said. “They’re a good front. They move a lot. They try to create issues in the run game with movement. We knew if we were able to put a hat on a hat and cut guys out of their gaps, with their movement, we could have a pretty nice day.”

Bulaga and Bakhtiari both said that the LaFleur run scheme differs some from McCarthy’s and that it has taken both the linemen and Jones some time to adjust. Jones seemed to be affected the most and wasn’t finding the big cutback lanes he had exploited in his first two seasons.

But on Sunday, everything seemed to fall into place.

“We were all on the same page,” Jones said. “Coach came up with the game plan and we focused in on it. Coming off the Philly loss, we didn’t want to take another loss. We know what kind of team we are, and we wanted to come out here and make a statement.”

Ground game gets going for Packers

Nearly nine months to the date since he was introduced as the Packers head coach, LaFleur and his offensive staff are continuing to evolve and work through the personnel on the roster. There are the small derivatives, like recognizing what tight end Jimmy Graham can do well and then putting that into action against Philadelphia. Or activating Tra Carson off the practice squad just before traveling to Dallas as opposed to exposing rookie Dexter Williams to a new situation

There are larger ones, like electing to dig into the playbook and go with more inside zone runs against an athletic Cowboys defense.

It’s one thing to talk about being willing to tailor your system to the talent; it’s another to take professional pride out of the equation and actually do it.

“I think that’s what coaching is all about,” LaFleur said Monday after his team moved to 4-1. “You find out what your guys do well, or maybe where a team is vulnerable that you’re playing against and you attack that. I just think that’s part of coaching, that’s part of game-planning. But ultimately you’ve got to know your players. You’ve got to know what they do well and try to put them in position to have success.”

Pretty good breakdown of MLF's scheming against the Cowboy LBs.

I wish they had run that scheme against the Eagles instead of running wide all the time. That played right into the Eagles defense.

He learned from it and adapted.  Something we haven’t seen in GB in a long time.

Sooooo nice to see a coach who's open to adjusting to his players and adapting the attack to take advantage of the other team's weaknesses, instead of keeping on pounding that square peg into a round hole. Good coaches adapt, learn from their mistakes, and keep on adjusting. MLF will have a nice, long, successful career if he keeps doing that.

The TEAM is doing something right. Didn't the "Get 'em a body bag" guy die recently?

Maybe cheating is next??

Didn't the "Get 'em a body bag" guy die recently?

If the Pack wins tonight, we join forces with the Badgers and own all of Michigan! Badgers own Michigan's UP. I have been very impressed with MLF to this point.  This team has won games in multiple different ways with multiple players being the focal point.  But what I'm most excited about is what appears to be improved team chemistry.  Several press conferences/interviews with players talking about how much fun they are having.  Now, winning makes everything fun, but If you don't have good chemistry during the good times, you aren't going to have it during the bad times.

Before the season, I said I'd be happy with 9-7 but with improvement being shown as the season progressed.  Obviously, my expectations have changes a bit, but I like where this team is headed.

Adding to that, you can tell the players are really buying into his message.   During post and pregame interviews they are parroting his talking points.

The reception of MLF in the locker room after games (they only show wins, unfortunately) shows they enjoy playing for him. Also, Tramon said that after the loss MLF struck all the right notes. Rookie coach? Impressive, so far. 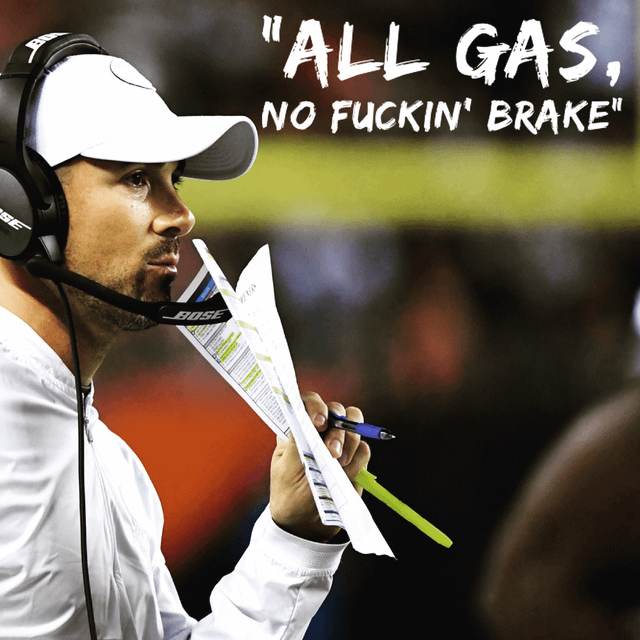 Not if your name is JohnnyZ.

Not if your name is JohnnyZ.

I've been impressed with LaFleur.  He dealt with the preseason and early season "drama" between him and Rodgers and came out better for it.  And his offense reminds me of a Bellichick offense, in that you really don't know what is going to happen week to week.  Depends on who they are playing and who's available.  MM was same thing week in week out no matter who they were playing and who was injured.  It was frustrating to watch at times.

There was no drama to deal with. Only media fabrication.