Fun Fact. The Milwaukee Brewers and I am exactly the same age.

The Milwaukee Brewers were officially born on April 1, 1970 when Federal Bankruptcy referee Sidney Volinn declared the Pilots bankrupt and awarded the franchise to Selig’s group for $10.8 million.

Same day I was born.

Explains a few things. Others will never get resolved.

Back to name this Brewer: That guy could pass for Bo Jackson.

You sir, are impressive. As kids, we loved Briggs, Dave May and Danny Walton in the outfield because in our $1.25 outfield bleacher seats and no Jumbotron scoreboard, we could see their faces better than anyone else...Bobby Collucio and Danny Walton for a time too.

Next on my Brewer card parade: Beyond being an enormous baseball fan and Brewers fan, my uncle owned a printing shop that printed the yearly Brewers Media Guides, so we got one every year, and I pored over those as a kid, learning every stat and fact I could.  Probably one of the first things I learned to read... And, my dad tried collecting the cards of all the Brewers each year given my birthdate, etc. So I had pretty full sets of the Brewers each year until like 1984/85?

This is an educated guess.  And it's less I recognize the player, and more that I recognize that card, as that was the 1972 style for Topps - one of the most unique styles they did. So, I'm gonna go with Ron Theobold?  Only other thought is Rick Auerbach, but pretty sure that 72 was like his 2nd/3rd year. Could be some bench guy I'd never be able to pick out reliably.

Whoever it is, the dude looks like he's 58 in that photo. Jesus. Definitely was throwing down a pack/pack and a half of Winston's per day though.

Did anyone else have the baseball card game as a kid?  You used the stats on the back of cards to play.  I can't remember the name of it, but the kid down the street had the game and it was a blast to play on rainy days.  It was where I first learned strike outs are just out (and not those damn double plays)

@Bong. I do remember playing some sort of game using the statistics from the backs of baseball cards. We played a Sports Illustrated game that used the stats of players from real teams. I always played the 1971 St. Louis Cardinals. Dell Maxvill anyone?

@Tim. Cool stuff on having insider access to Brewer memorabilia. As I’ve collected sports cards, I’ve also picked up a lot of arcane Brewer stuff from the 70s. I will note that I did attend Robin Yount's 3000th hit game. Here’s your Rick Auerbach by the way and good job on “The Little General “ Ron Theobold! Cleaning the basement during quarantine and my wife found my complete set of 1982 Brewer Police cards.  I melted.

I had no idea there were variations

I know this isn't the one you were talking about Bong, but I loved this game.  Got me through all those times when my new wife and I would get into arguments and need time apart in the late 80's.  Of course, playing the game is what brought on most of those arguments.  It was a vicious, but beautiful circle.

Cleaning the basement during quarantine and my wife found my complete set of 1982 Brewer Police cards.  I melted.

I had no idea there were variations

My Dad was a Milwaukee detective during those years...I have several hundreds of the “Police Cards” in a bin somewhere...you’ve motivated me to go find ‘em.

@El-Ka-Bong, Strat-O-Matic? I think that's the game you mean if you are talking about cards included with the game and not actual baseball cards. Played the shit out of that game in the 70's.

I have a Vince Lombardi Football game that works that way, I think. Not sure where it is.

Used to play this one a ton. I remember using a pen to make all my favorite player home run areas bigger. (I also would call the arrow on the line and re-spin quite a bit. My team usually won.)

I had a football one too, that was slightly more complicated. 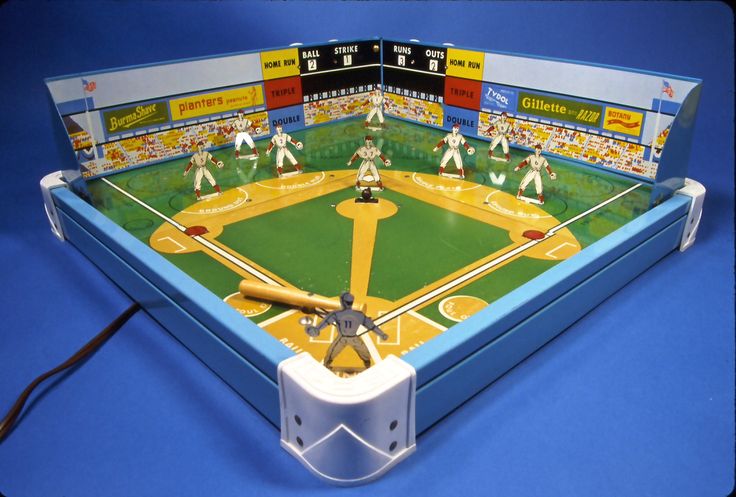 I would play this for hours,  it had a wooden ball, with a magnet on one side. u can just barely see it on the pitchers mound.  the pitcher was spring loaded, you would just pull it back and put the ball in the metal holder. Behind the left field wall was a button you had to push to release the pitch. Just pull the bat back and...........PLAY BALL  !!!!

On this date April 8, 1974, in the home opener in Atlanta, Hank Aaron breaks Babe Ruth’s career record by hitting his 715th home run, connecting off Al Downing of Los Angeles in the fourth inning.

Its also amazing how much 5he game and, especially, the broadcasts have changed in 40 years

Its also amazing how much 5he game and, especially, the broadcasts have changed in 40 years

You need the Uecker call on Cooper's two-run single to get the full experience.

"I'm gonna call the games 'cause I can't stay focused out here. I'm too busy yelling at people." -Jason Kendall

An injury forced the Pirates to put @jasondkendall18 in left field. And he was so bored that the usual catcher still wanted to call the signs 😂 pic.twitter.com/DpTpqfK1jT

@KoltenWong and I will be playing on IG live Friday at 6 EST. NL central rivals. @Brewers @Cardinals @iplaycornhole come join and chat w us!! pic.twitter.com/BzPB1wYVQs

When my dad became upset at the Cubs’ performance he would write other teams, offering to sign a contract as a free agent fan. Some teams wrote back to him. Here are some of their replies. pic.twitter.com/vNDbbBzMS9 You are correct, sir! Bill Parsons ?   just a guess....I can't remember what he looked like...I think he was a high draft choice brought in almost immediately to pitch..not sure which year...early 70's...btw...thanks for this thread...especially with no sports going on...brings back good memories..

Bill Parsons it is! I believe he won 10 games as a rookie and we had high hopes for him....I think he was out of the league within a few years.