Then again. When did they ever stop?

Brandon Spikes and Aqib Talib have both said since leaving New England in free agency that when they were on the Patriots last year, the team gave them injury designations that weren’t accurate. Spikes ended last season on injured reserve with a knee injury, and there were reports that Patriots coach Bill Belichick actually put Spikes on IR because Spikes had shown up late to practice. Spikes seemed to confirm that in an interview on WGR in Buffalo.

“I heard they put me on IR and stuff like that. That was just a false report,” Spikes said, via ESPN.com. “That’s just how things go there. Almost like what happened with Talib and his hip.”

Talib was on injury reports last season with hip injuries, but after signing with the Broncos he said he never had a hip injury.

“The Patriots have their way of reporting stuff, but I haven’t had a hip problem since Tampa,” Talib said. “The injury I had was actually a quad injury. It was reported as a hip injury, but that’s how they do things.”

That’s not how the NFL wants teams to do things. The league office may look into the possibility that the Patriots are playing fast and loose with injury reports.

Green Bay does too, such as James Jones rib injury (never announced until after the season).

In this case, Belichick has a point. The ONLY reason the injury report exists is for gambling purposes. But, of course, the NFL doesn't support gambling. Right?? Right?!?!

Why don't you ask Goodell about this when you see him  at the draft Boris?

But, of course, the NFL doesn't support gambling. Right?? Right?!?!

Green Bay does too, such as James Jones rib injury (never announced until after the season).

In this case, Belichick has a point. The ONLY reason the injury report exists is for gambling purposes. But, of course, the NFL doesn't support gambling. Right?? Right?!?!

Jonathan Franklin seemed to suggest he was not actually injured when the team put him on IR.

I thought James Jones hid his injury from the staff? Franklin to IR is the one that seems to fit this method of working the system.

IR is just a place further back on the shelf, right behind practice squad. Heck, if I were a GM I'd use IR too if a guy was "injured" and who was almost good enough to make the 53 but not quite, and exposing him to the PS means someone would snatch him away. Franklin is a perfect example.

Everybody just chill out to the ultimate max until FreeSafety chimes in.  I'm sure he has some thoughts.

just shows to go ya I guess, sometimes they don't lie.  I was rong. Patriots cheating again? How could you tell? Were they breathing?

The HecklerMember
Originally Posted by Boris:

I would bet Boris's paycheck that ALL teams in the NFL cheat.  I am not a fan or defender of the Patriots but I think all teams cheat to certain degrees. All teams try to steal signs, I bet they all fudge the injury report, etc.  I bet our favorite team does it as well.

I would bet Boris's paycheck that ALL teams in the NFL cheat.

They're stupid enough to tamper though, but of course not get punished for it

Well, Lookee here what thread we need to pull up again!

During Spygate investigation, NFL found that Patriots had excuses ready in case an advance scout got caught filming another team. One of those excuses: Tell them you need the footage for a team show. #Patriots https://t.co/VQ2mebxENu pic.twitter.com/zt5Mzr8MGX

Still, Dianna Russini of ESPN reported a Bengals employee was monitoring the cameraman during the game and claimed he was shooting the Bengals staff on the sidelines during the first quarter. "The cameraman asked if they could just delete the footage and it all be forgotten," sources told Russini.

Did they ever stop cheating?

Based upon the Bengals performance, they were probably filming to figure out what not to do.

They’re the Chinese of the NFL.

I've got some ocean front property in Arizona for sale for anyone who buys this sh!t. 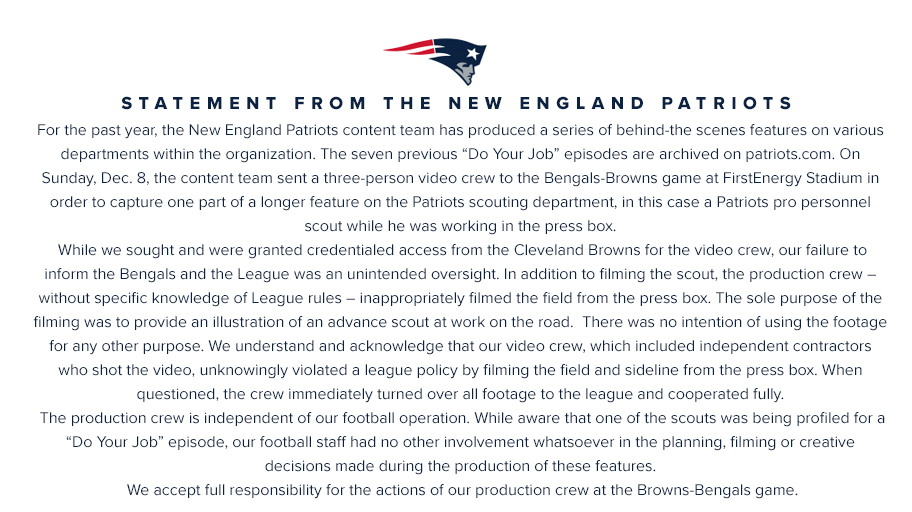 You got all your bases covered when you are cheating to gain an advantage over the Bengals.

My response to that statement?

Then why has NO OTHER team been caught! I'll tell you why....because the other 31 teams have respect for the game.

There's a reason why the Patriots got royally screwed vs. K.C. Sunday Night. Expect to see that often. I'll bet the League has had quite enough of the Patriots cheating.

Very crafty response by the Pats

Of course Bill Belicheat is going to provide some lame ass excuse.  The question I have is why would anyone actually believe him?

This is an organization that actively engages in and promotes this type of behavior.   If this shit happened in the NCAA they vacate wins and can suffer harsh penalties like having scholarships removed.

The league should take a stand and say you know what?   Take away multiple draft picks this time and a institute a postseason ban.   Enough is enough.

Out in Oakland, it was reported that the Raiders had offices in a high rise that overlooked their football field. When visiting teams came in for a pregame practice, Al Davis's staff would have those practices filmed for the Raiders to prepare for that team.

Looks like a skyscraper is needed in GB, lets go Murph!

I think the Quality Inn in Green Bay is three stories.

I'm sure this tape will also be destroyed by the league before anyone else can look it at it, just like the tapes related to Spygate were ordered destroyed by Goodell ten years ago. Supposedly there wasn't anything really to see. I read some of the old articles and was surprised I didn't remember the Packers were the team that first caught them.

The Patriots’ taping apparently went undetected until 2006, when Packers security caught cameraman Matt Estrella filming illegally. (He claimed he was merely taking scenic shots for “Kraft Productions.”) That offseason, the NFL warned the Patriots in writing. Before the next year’s opener the Jets set up a sting operation, with the assistance of team and NFL security, to catch the Patriots in the act.

FROM THE SAME ARTICLE

Inside a room accessible only to Belichick and a few others, they found a library of scouting material containing videotapes of opponents’ signals, with detailed notes matching signals to plays for many teams going back seven seasons. Among them were handwritten diagrams of the defensive signals of the Pittsburgh Steelers, including the notes used in the January 2002 AFC Championship Game won by the Patriots 24-17. Yet almost as quickly as the tapes and notes were found, they were destroyed, on Goodell’s orders: League executives stomped the tapes into pieces and shredded the papers inside a Gillette Stadium conference room.

This is almost exactly what they were caught doing in Cincinnati, but now they have the plausible deniability that these are "contract workers" and that they didn't "have any knowledge" of what they were actually filming. Of course, taking pictures of some backup QBs signaling calls in on the field is exactly what you'd expect to see in a documentary about advance scouts (a truly exciting topic related to staying in a lot of hotel rooms).

Know how many Super Bowls the Patriots won between 2006 (when the Packers caught them illegally filming) and 2013 - zero. They were still a great team, but they lost in the playoffs every  year. In 2007 when they probably still had notes on all the signals, they went 16-0 but lost on the helmet catch. Then they gradually morped into a team that had the same random luck as other teams. The last few years, they morped back into a team that always seems to be a step ahead of the other team and seems to "luck" out more than other teams - announcers and talking heads just attribute it to Belichick's brilliance. It may have just as much to do with the the fact that they've just figured out a different way to cheat.

Sadly this is the way of the world. But I would like to believe that this stain would prevent the renaming of the Lombardi trophy, at least in "honor" of Belichick.

If it's confirmed that this cock sucker is doing the same shit that led to them losing a 1st round pick, you got to ban him.   Keeping integrity requires that this guy is removed from the league.

Davante, also not a big LB, DL kinda cat. Hard to tell. That's why we must be patient.
6 minutes ago

There were a number of good players selected later in the first round namely Noah Fant, Josh Jacobs, Montez Sweat, and Marquise Brown.
21 minutes ago

Boring. Doesn't fit the theme, but Miller/Coors didnt step up and American Family did. I got used to Fiserve so I guess I can get used...
23 minutes ago

We all hope Gary becomes Dee Ford, but because Dee Ford exists isn’t the most compelling argument that Gary might become Dee Ford. We...
37 minutes ago

It’s amazing- Americans don’t really know how to appeal the European fans. They just try to bring American “cool” to the party, and for...
45 minutes ago

Hornets are the home team.
50 minutes ago

Dee Ford is a better comparison. Drafted later in R1 than Gary (23rd), but sat behind two premier players (Houston, Hali) and made very...
2 hours ago

That's why there's a Bucks forum. Can we start a TJ Watt forum too?
2 hours ago

I am not shitting all over Gary, but Adams had pretty much production his rookie year in the playoff against Dallas than Gary had all...
2 hours ago

Very true
2 hours ago
As much as I love the Smiths the reason they were in that position to begin with was their failure to add decent OLB pass rushers the...
3 hours ago

It’s really just an alternative to the onside kick. Only for use in desperation. I kind of like it. Too much risk (giving the other team...
3 hours ago

How do you know that they didn't try to trade out & weren't satisfied with any offers? I forget, do you snap your fingers or click...
3 hours ago