Wow. When does she move off to assisted living?

She could room with Jerry

Who called the dagger too early? I guess there would have to be a game thread for that. How bad is it that Bears/Cowboys don't even warrant a game thread during a prime time game?

There was a thread. Capably started by packlandinva., but I’m pretty sure the mods killed its entirely due to catts

I just saw this thread, so forgive me for chiming in late...

Of course, Aaron is elite...no f'ing question. The real question is: is the team elite? Are they committed, as a team, to go all the way.

Watching the 'Niners/Saints game today made me realize the Packers have a serious obstacle in their path to the Super Bowl. If we are going to go, we need to solidify the middle of the defense and get off the field on third down, stop giving up big plays, and figure out how to sustain drives and punch it in the end zone. We'll never get past SF if we don't improve these key areas.

Last five games. He's elite and capable of playing at that level, he's just not doing it and he needs to play better.

Last five games. He's elite and capable of playing at that level, he's just not doing it and he needs to play better.

How many TD passes on the season? He missed at least two for TD's today. He has slipped, there is no doubt. He can still have a sensational game now and then, but that he has slipped is obvious, and that should not be unexpected or a surprise. It isn't all on the receiving corps.

The saving grace is he still protects the ball, keeping the INT's way down.

There was 2 plays yesterday where Rodgers over-threw the receiver deep & if he completes those 2 plays, he's probably on the bench in the 4th quarter of a blow out.

He knows it too.

This is December football & he'll need to play better vs. the Bears & Vikings if the Pack want to keep winning.

I'd add his fumble in there with the two missed long balls. Careless ball security and he had plenty of opportunity to get the ball out earlier.

Wasn't his best performance, that's for sure.    Good news is we have a team this year that doesn't require him to be super man every week.    That said, when we get to the playoffs, we're gonna need more from him.

He isn't the 2011 version of Rodgers, but he's easily a top 10 QB in the league and I wouldn't trade him for anyone but Mahomes or Lamar Jackson (and I'm not sold on him yet in the playoffs).

What they lack to make a deep playoff run is playmakers. They have two on offense (Adams and Jones) surrounded by a bunch of average to below average guys at the skill positions. Lazard is a decent possession guy but he's not a game breaker, J. Williams is a solid backup at RB, but then most of the other guys need to significantly improve or be replaced next year (all the TEs, MVS, Allison, Kumerow).  Adams hasn't had a lot of home run plays, but he's a threat and Jones was the reason they've won a couple of games. When you don't have enough playmakers on offense, every drive seems like a slog. Getting 2-3 big plays a game turns a 20-15 victory into a rout. Rodgers overthrew Graham and Jones for long plays by a step or two yesterday, but there's a reason teams are leaving Graham one on one - he's not a playmaker any more and they'll take their chances with him. Those same overthrows aren't overthrows with Jordy Nelson or Greg Jennings because they had more chemistry with Rodgers and were talented enough to adjust to the ball. Rodgers made them look good, but they also made him look good at times. Other than Adams, they don't have those types of guys.

The reason they are a 10-3 instead of a .500 team this year is that they added two playmakers on defense. Z. Smith is probably their MVP this year and P. Smith has also been a difference maker. They have solid guys elsewhere, but no playmakers (yet) in the secondary in the mold of LeRoy Butler, Charles Woodson, Sam Shields, or Nick Collins. In the last 61 regular season games (since the start of 2016), they've had one pick six which was Breeland last year.

Impact players make plays that separate good teams from championship teams. We don't have enough of them in part because a string of drafts in the mid 2010s were lousy.

Another way to put this is how many Pro Bowlers will the Packers have this year. They are 10-3 and maybe only have one guy that will be a selection (Z. Smith). It says something about MLF and Pettine that they are 10-3 on a team with one Pro Bowler (Crosby, Rodgers, and Jones have a chance, too) and have gotten no defensive or special teams TDs.

I think Preston Smith and Bak are both leading voting for their positions. Bak probably more based on past reputation.

I totally agree that there aren't more than a handful of guys I'd take over Rodgers this year despite what stats might say.  Jackson, Mahomes, and Wilson have played the best ball of any QBs I've seen this year, but Rodgers might be next in line when you factor in just how lacking in talent and explosiveness the Pack is at their #2 - #5 WRs and their entire TE corps.  I might throw Brees in there too, but even his team won nearly every game he missed due to injury which shows that he clearly has more to work with.

If you gave Rodgers the exact same talent he had around him in 2011, he wouldn't match the stats he had that year, but he probably wouldn't be that far behind it.  The one thing that I think is different now in his own game than then, I think he's more skittish in the pocket when he's getting rushed as sort of a PTSD from the collarbone and knee injuries of 2017 and 2018.  Who knows, maybe he'd be less skittish if he felt he had more guys who could win 1 on 1 matchups to throw to.

That was one of the worst games I've seen from Aaron Rodgers in a while. Call me a hater or whatever - I understand they won the game and all...

But when evaluating his job as the QB in vacuum - he was bad. Alarmingly bad. I'm speechless

Trade him before the rest of the league finds out.

Nope, 19 in a row ended when they lost to KC 2 weeks before that.

Nope, 19 in a row ended when they lost to KC 2 weeks before that.

You are absolutely right, it was 19 for Rodgers, I shorted him one game.

What I got sick of Sunday was him staring down Adams to the right as the Redskins had BRACKETED him (NO ONE is gonna get free with that right double coverage) while to his left Lazard is running free and he's not even looking that way. All the criticism of Rodgers to me boils down to him just not seeing the field the way he used to.

Wasn't his best performance, that's for sure.    Good news is we have a team this year that doesn't require him to be super man every week.    That said, when we get to the playoffs, we're gonna need more from him.

Agreed.  As choppy as this team is at times isn't nice to have some semblance of balance?

There's a breakdown by Fennell of one play. Sure appears like a big play to Lazard might have been there.

Holy shit!  That's his proof?  Hey Ben, did you see the pocket totally collapsing?  I'm sure Rodgers was ticking his options as Buluga was getting walked back.

Here, let's take Fennell's first stoppage of film and see if anything jumps out at you. Hmm, pocket is already collapsing, WR still in their routes.  But he's going to continue to talk about developing routes with a DE in Rodgers ear.  How dare he run for positive yards as Fennell talks about how he's getting DRAGGED DOWN.  Well, why is that Ben?  Maybe because it was sack time again.

STFU.  Fucking clowns like Nagler and this yutz trying to make names for themselves gets old fast. 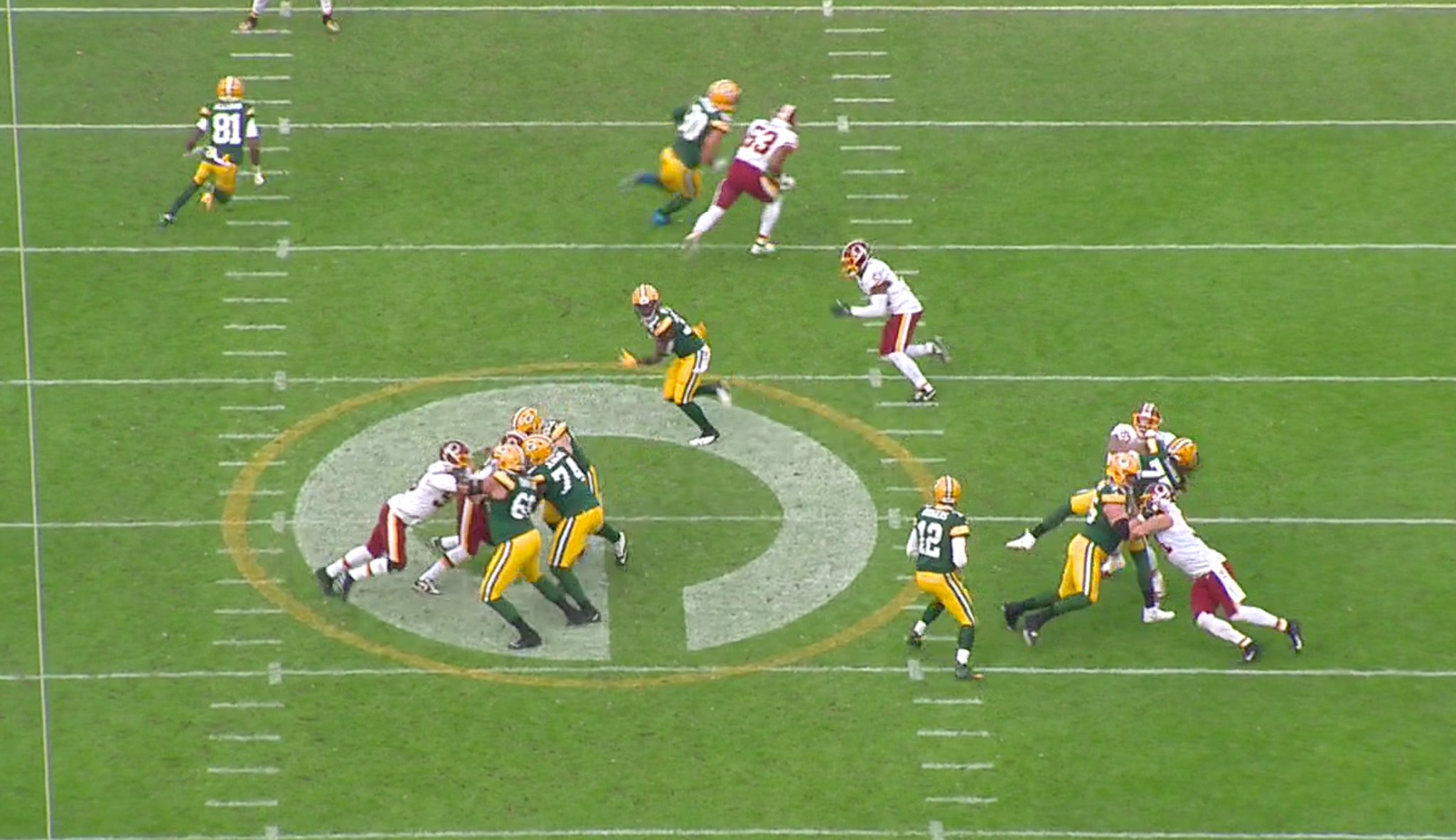 Another view of the play. Pretty easy throw to Williams is there.

So Allison isn't even out of his break.  Graham is covered and the routes are still developing as Rodgers can clearly see Buluga getting walked back.  The DT DRAGGED HIM DOWN because he was in the vicinity as the pocket quickly evaporated.

Another view of the play. Pretty easy throw to Williams is there.

With two of the defenders vacating the space when covering Williams and Graham.  Pretty sure he wasn't trying to get dragged down and was seeing the potential for a possible 10 yard gain.

Blaming Rodgers for holding the ball when he took a very reasonable option.  Maybe Fennell should talk about the oline getting beat?  Crazy, I know.

Serious question.  Who would trade Rodgers?

I would.  If he's as bad as made out to be I would in a hot second.   Think of the crazy draft and FA capital.

My thoughts on that prior to the year were I wanted to see if he would buy into the new guys system or would he still be going sandlot all game long.

So far it seems like it's about 50/50 split.    The fact that he rarely turns the ball over alone makes him an extremely valuable QB.   But is that worth his price tag or should we be expecting more return on that coin?

You can't look at it like we would have an extra 25 million in cap space because you would have to fill the QB position too.   Maybe you get a Andy Dalton type for somewhere between 10 and 15.   So you've downgraded the QB position to free up 10 million.   What upgrade are we gonna get for 10 million that is so significant that it not only overcomes the drop off at QB but adds significant value on top of that?

It just doesn't make sense to do it unless you are going to go full rebuild.   Then you sell everyone and everything like the Fins did.

That was one of the worst games I've seen from Aaron Rodgers in a while. Call me a hater or whatever - I understand they won the game and all...

But when evaluating his job as the QB in vacuum - he was bad. Alarmingly bad. I'm speechless