I actually thought this might be a trap game.

Bucky has these other kids playing scared.

I am a bit surprised, but pleased and impressed!

Y'all are one for two.

Not bad for the first game of the season.

Bucky was -10.5 in Vegas.  Easy to misunderestimate teams early in the season, but the team looks ready on both sides of the ball. Top Ten? Very early for that, but no reason to talk Bucky down in a game they are dominating in.

Bucky was -10.5 in Vegas.  Easy to misunderestimate teams early in the season, but the team looks ready on both sides of the ball. Top Ten? Very early for that, but no reason to talk Bucky down in a game they are dominating in.

There's been a few 'new to me' names I have seen flash tonight.  Despite the opponent, that's a good sign.   They should be making play and they are...

STs improvement this year would be huge.  I even forgive the kid for missing the FG.  No more tubby brazilian this year (and he struggled last year).

Nice return, keep it up!

Look at all these young defensive players... a bunch of young players showing some talent. Leonhard has a full cupboard...

It has to be eligibility, it really does.  At this point, why burn time for him that forces a reduction to his time at UW while he's still learning?

Look at all these young defensive players... a bunch of young players showing some talent. Leonhard has a full cupboard...

TBH it's pretty encouraging!  I certainly didn't expect it this year, but I had hope.

A blowout shutout on the road to start the year.

Last year the Badgers had a lot of games with slow starts.  This one was domination from start to finish.

Appears Leonhard has the defense once again pointed in the right direction. Things to work on, but a surprisingly easy win and a nice endorsement from Mahomes. 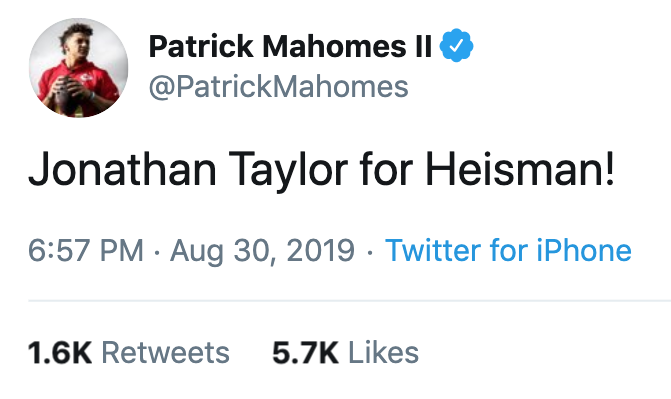 Appears Leonhard has the defense once again pointed in the right direction. Things to work on, but a surprisingly easy win and a nice endorsement from Mahomes.

How awesome of my #2 boyfriend to know who the next Heisman winner is.

I think we are a bit spoiled when it comes to running back performance.  JT might be the best of them all.

I caught most of the game live streaming and from what I could tell the defense played lights out.  Good effort and intensity and if they can generate turnovers this should be a very good squad.

Not sure at this point what to think about Jack Coan but it’s the typical game manager Badgers QB.   I realize it’s the first game but against a team like Michigan he’s going to have to play better.  He seemed a bit slow processing reads and missed a few throws.   I like the WR group (even more if Cephus gets back to previous form) but there will be times where the QB is going to need to take pressure off of Taylor.

The Badgers QB has one primary job- make teams pay for loading the box. Coan missed two throws that will be there all season, and will be the difference between winning and losing games against the top teams.

The Badgers OL allowed a lot of pressure. There were a number of blitzes that Coan missed, and that’s on him. But the Badgers got beat some on the edge, and that’s something to keep an eye on. Michigan, Iowa, and OSU have the guys that can change the game.

The OL was a bit shaky in pass protection but did well setting up the run game.  From what I could tell South Florida does have some decent athletes and their speed and quickness (DL) gave the Badgers some problems.  However,  Coan needs to make quicker reads and get rid of the ball.

In reality, if the Badgers have decent QB play this is a 10+ win team.    Taylor is a stud and they have above average receivers.   If Cephus can emerge as a force once again he and Pryor and Davis are probably as good as any trio in the conference.   It all hinges though on the QB.   Good teams with better players will load the box and you can’t expect Taylor to give you 200 a game.  At some point the QB needs to make big plays and I don’t see it from Coan.

They landed Mertz and yes I know he’s green but why muddle through an 8 or maybe 9 win season with Coan when you know he’s not the long term answer?

I am totally with you on Coan and Mertz.  I kind of hate to throw a freshman to the wolves but in reality is a green freshman a worse than what Coan will give us?  I say get him out there.

Has Cryst said anything about maybe playing him in a few games and then redshirt Mertz?

I also agree that they cannot expect Taylor to get 200 yards a game.  But, I do think that if teams have to respect the Badgers QB (even a little) that will open up big things for Taylor.

I am very concerned in a couple of weeks when they play Michigan.  The Badgers got absolutely dominated last year and while they turned over a number of players you know the Wolverines will have good athletes and a defense that will get after the Badgers.

Wish UW had a few more games under their belt before having to play those guys.  Hope the HFA is a factor otherwise it could get ugly.

I am very concerned in a couple of weeks when they play Michigan.  The Badgers got absolutely dominated last year and while they turned over a number of players you know the Wolverines will have good athletes and a defense that will get after the Badgers.

Wish UW had a few more games under their belt before having to play those guys.  Hope the HFA is a factor otherwise it could get ugly.

It wasn't so much that they got dominated. It was that the QB play (or the passing game was so inept) that it handicapped them badly. It was 13-7 game at the half and 3 of Michigan's points came after a Hornibrook pick when the defense got a stop and forced a FG deep in Wisconsin territory.

It was still 21-7 with about 10 minutes left and it was Badgers' ball. Then Hornibrook threw a pick 6 and the rest of the game was garbage time. Maybe the Badgers weren't going to win even with good QB play, but the QB play gave them no chance. The interceptions are one thing. Hornibrook's QBR rating was 0.9. To give you some perspective on that, DeShon Kizer's QBR in the Bears game last year where he came in and threw a pick 6 to Mack in one of his 7 passes was 5.6. Hornibrook was beyond terrible and left a lot of potential plays on the field. The Badgers actually ran the ball well (26 carries for 196 yards on designed running plays).

The competitiveness of this year's game likely comes down to whether Christ has made the correct choice at QB. It's one thing for Coan to look good against direction schools (South Florida and Central Michigan). It's another for him to be able to make throws against a team filled with some future NFL defenders.

Michigan, great analysis.   I for one think Hornibrook had some moments but he also has been THE reason recent Badgers teams lost in big spots.  Case in point when he was up against the OSU defense. Yes, OSU has better athletes but they were competitive outside of the QB position.  I was there in person and Hornibrook missed wide open receivers and threw balls in to the backs of others he was horrible.

I just wish the Michigan game was a night game.

Sign In To Reply
Post
Boris replied:
Demarcus Lawrence with a gamble that paid off -- That could've been called "neutral zone infraction" but it worked out & saved 4 points.

MichiganPacker2 replied:
Giannis supposedly headed back to the US tomorrow. We should know soon.
Fedya replied:
McCarthy with a bad decision to go for it on fourth down.

Blair Kiel replied:
With that resume, how did the Redskins not sign him?

Timmy! replied:
Fox and the NFL can jam Aldon Smith up their asses. Failed to mention him thumping around his girlfriend, shooting his (illegal) guns...

Fedya replied:
Dad and I enjoyed Thanksgiving dinner. I had a nice Torrontés.

tsr86free replied:
I realize that Fuller is due for a good sized payday next season, and to fit another big contract in would have been very difficult, but...

MichiganPacker2 replied:
Will Fuller Packers offered a 4th, Texans wanted a 2nd. Have to believe a 3rd and a 7th might have gotten it done, but then we wouldn't...
tsr86free replied:
Fuller 6-171 2 TDs, he’s ok, but not worth a draft pick. 😈

pkr_north replied:
just said the EXACT thing in my mind just now, LOL!! that is what this guy does huh?

MichiganPacker2 replied:
StatPadford time
artis replied:
No miracle finish for the Loins on this day. Nice to see Watson take out some frustration on them.

Blair Kiel replied:
Nobody wants to hear about my fantasy team featuring Will Fuller at wr, do they? 😀

michiganjoe replied:
This should just about be it for Matt Patricia.