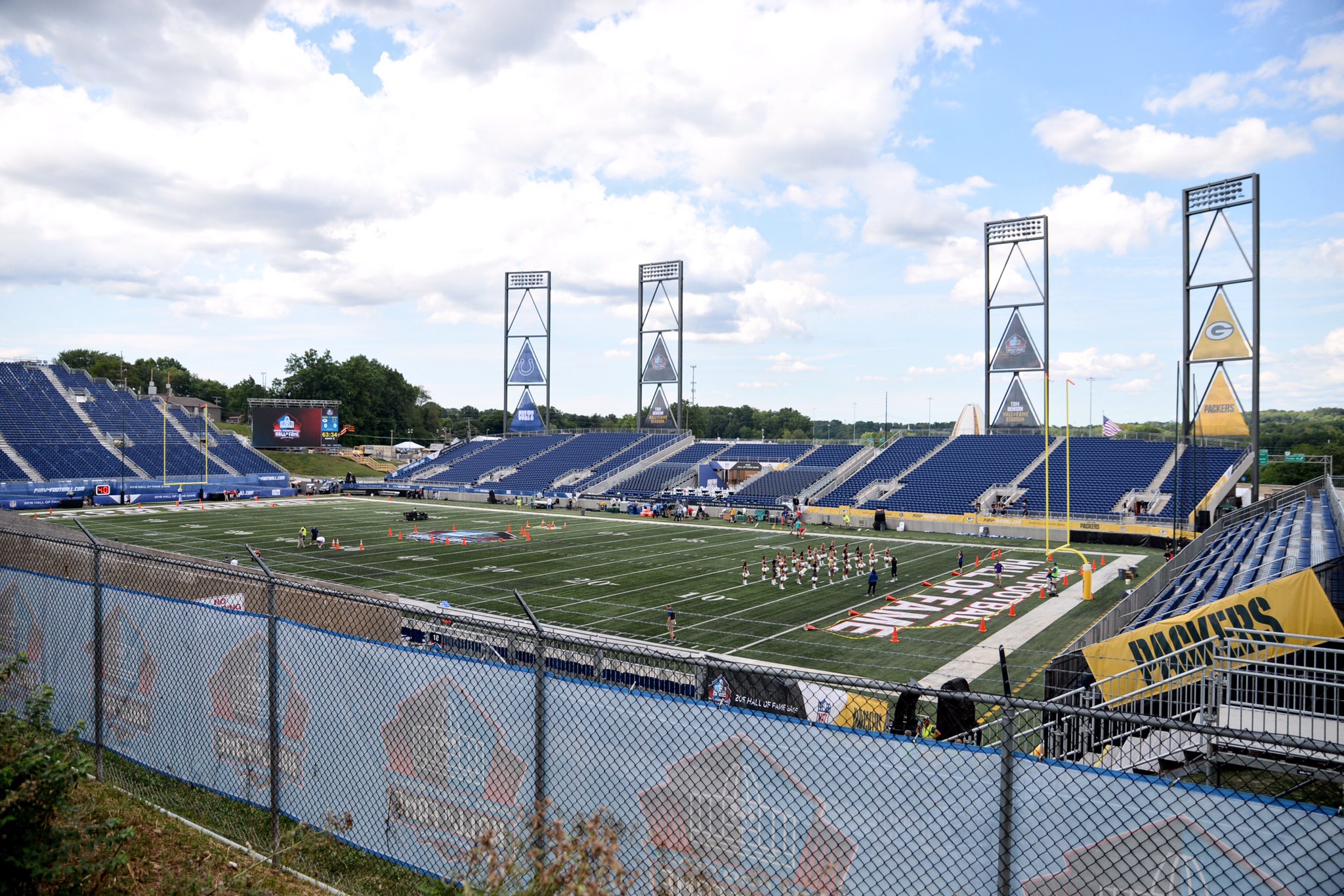 Colts QB Scott Tolzien played for the Packers from 2013-15 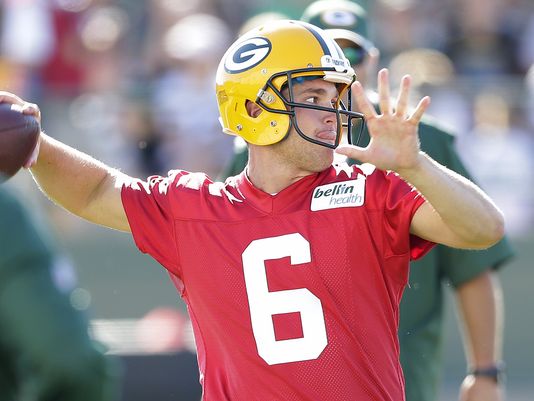 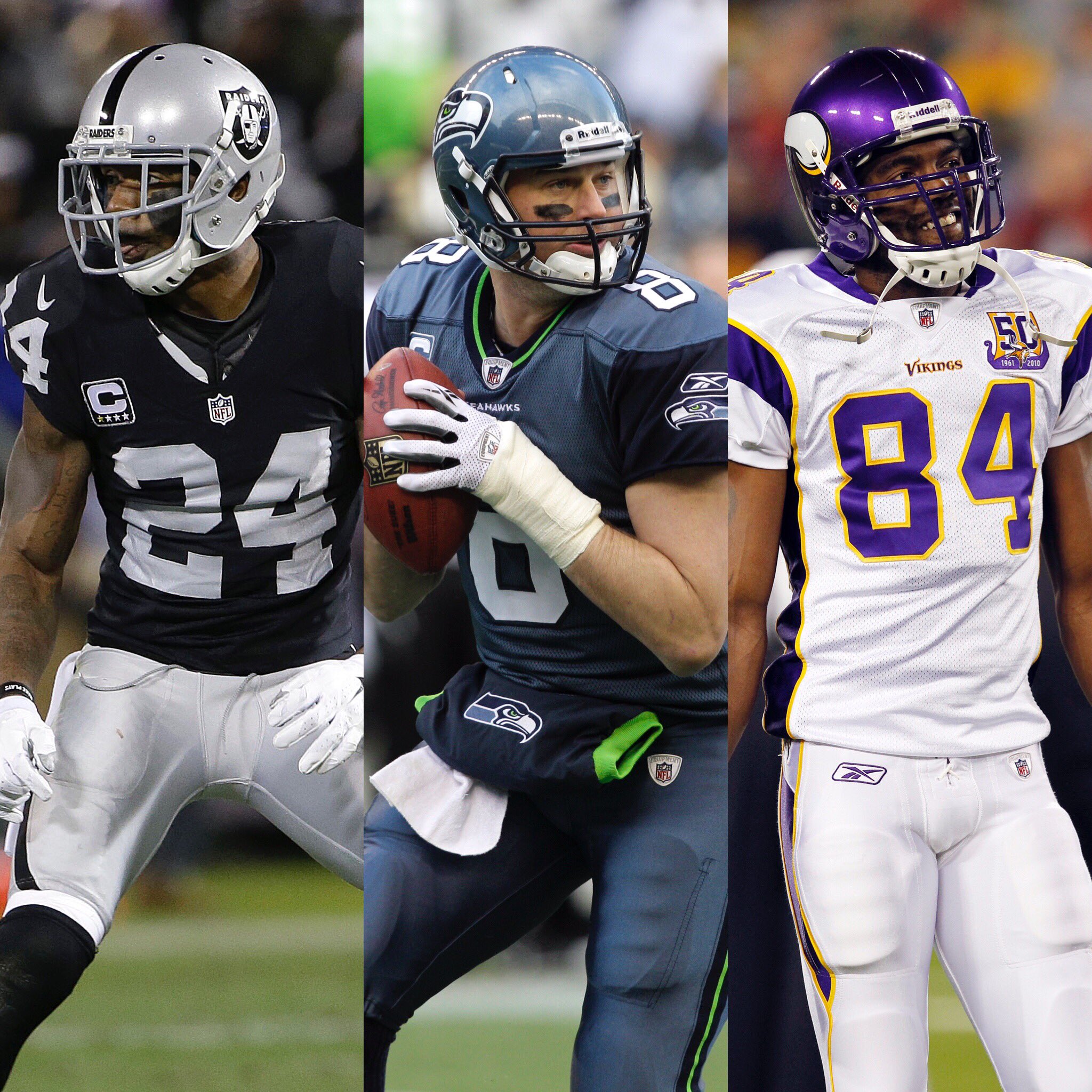 .@AaronRodgers12 is @WildeAndTausch‚Äôs first guest EVER! Interview will air in a 4-part series starting Tuesday. 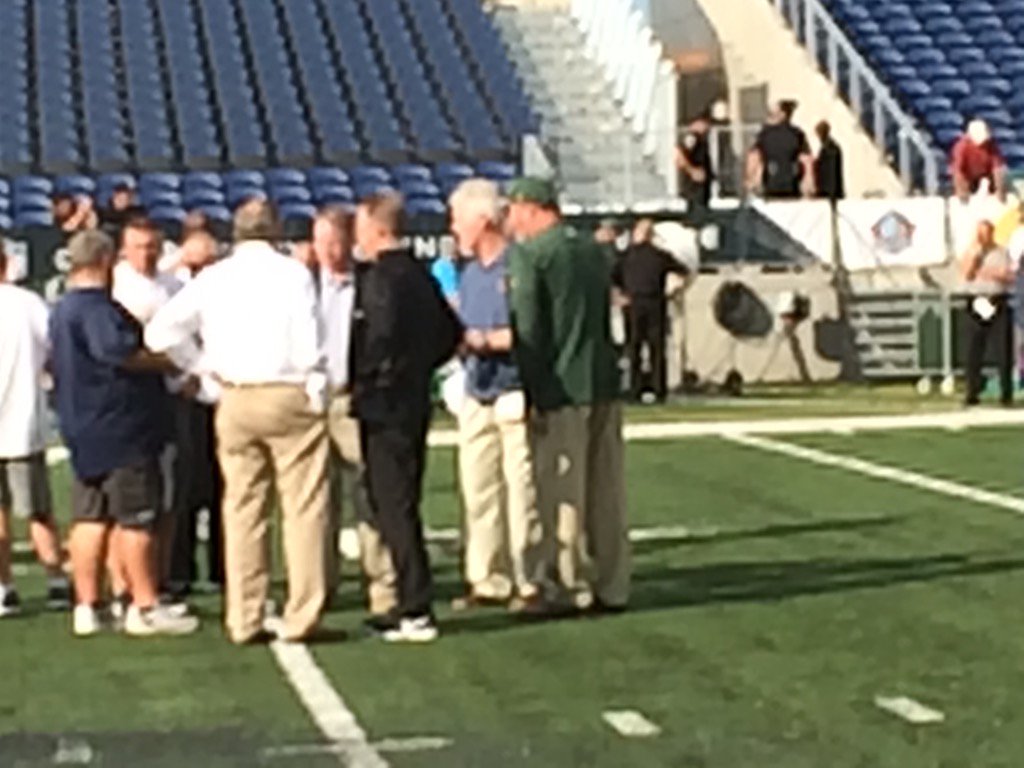 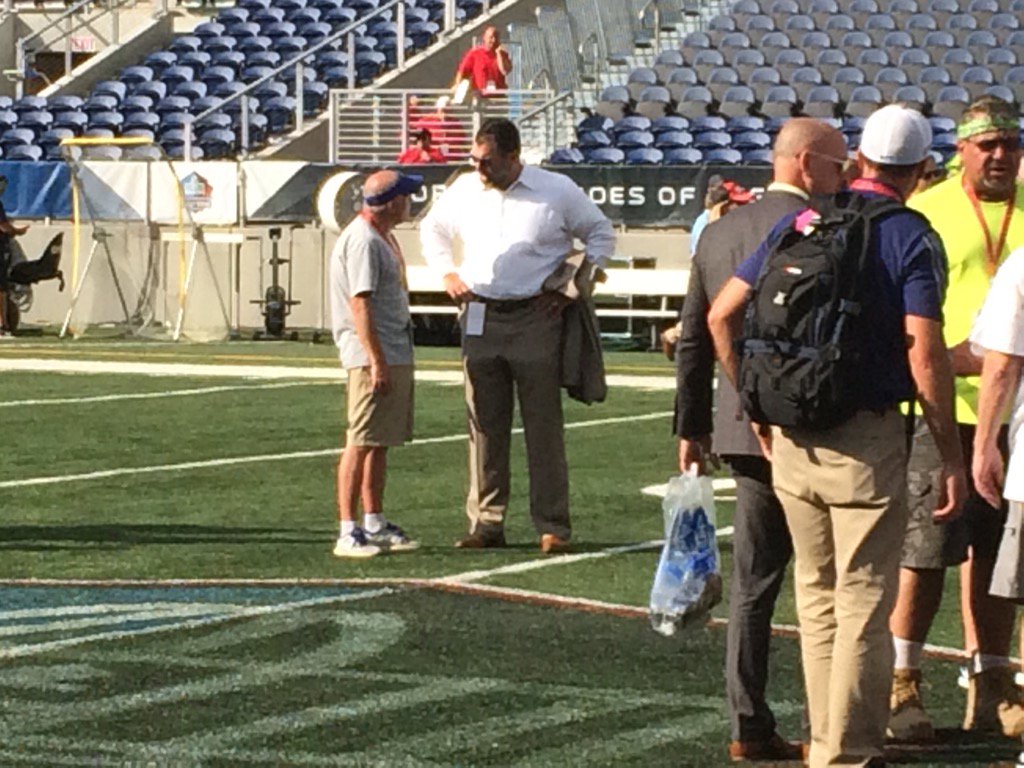 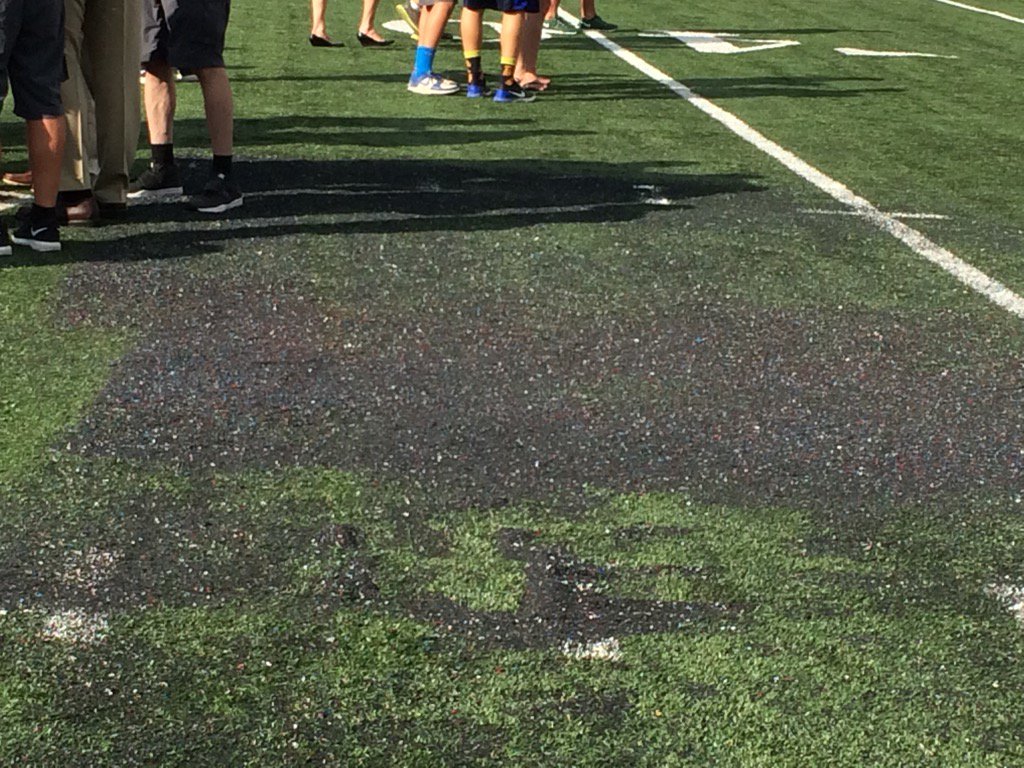 There are large chunks of this field that are nothing but rubber pellets right now.

Someone on HOF Stadium field said rubber pellets are melded together, and it's impossible to get a cleat into it. So that's a problem.

Standing on the field, it's hard for me to imagine how they can play a game safely on this surface. Cleat could get stuck in hard rubber. 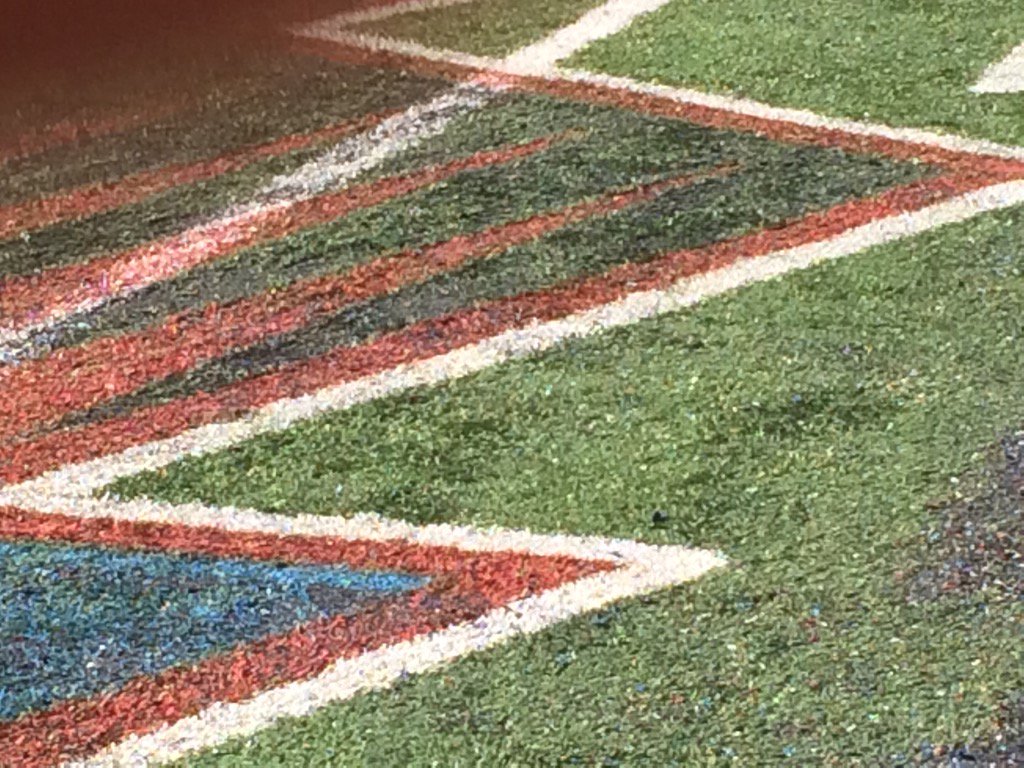 Field Turf melted on parts of logo, it's like rubber, big concern cleats will stick there, major player safety issue 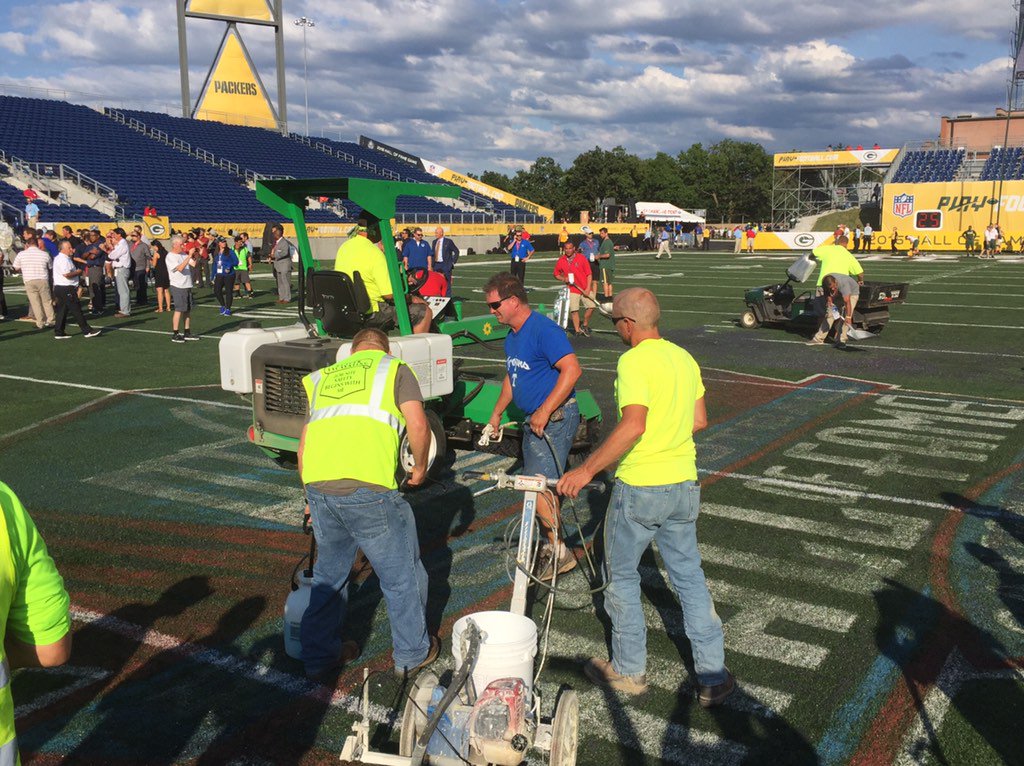 Some problem with @ProFootballHOF midfield logo. Less than 2 hrs to kickoff. No warmups yet. I smell paint. 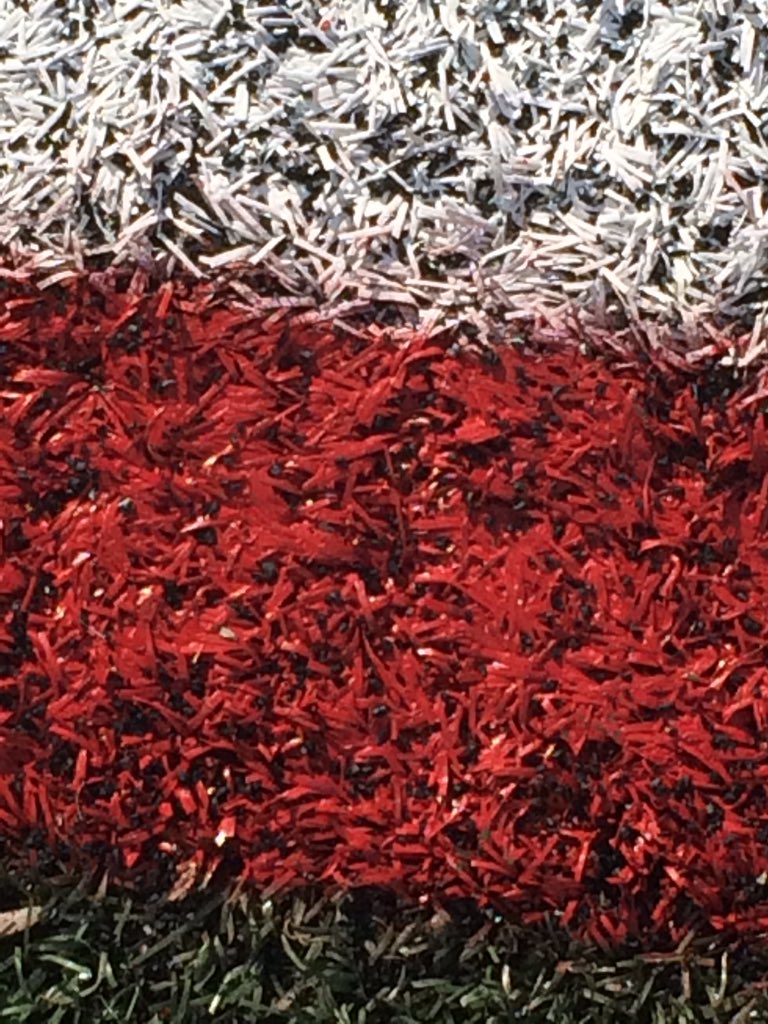 This is not the same field as the one #Steelers complained about last year. It was taken from the Superdome after Sugar Bowl this year.

Safe to say people on both teams are pissed right now. #Packers and Colts didn't want to play this game anyway.

Preseason games have been cancelled before due to turf issues. Eagles-Ravens in '01. This is a bigger stage & embarrassment, obviously.

There is an issue with the field in Canton causing a lengthy delay. Warmups have not started, and fans have not been let in yet.

Players who were on the field are now heading back to the locker room. There have been lengthy discussions with executives near midfield.

Both teams have exited the field and the big brush that was being used to sweep the field has been removed. Not looking good.

Issue isn‚Äôt rubber pellets themselves, it‚Äôs that the paint on the field has done something to make them rise and cause sticky soft spots.

Both organizations very concerned about playing surface and there are real questions about whether tonight's game will be played.

Uh oh. Looks like there is concern with the field. Seems to be concern on both sides. Link Titm posted talked about this being a borrowed field from the Superdome.

From article: "However, the Field Turf surface has been replaced as part of the stadium‚Äôs $80 million renovation with a surface known as UBU turf that was removed from the Superdome after the 2016 Sugar Bowl. A new permanent surface will be installed in Phase Two of the renovation, which begins shortly after the Packers and Colts play"

The Packer's have not hid their "lack of enthusiasm" about playing a 5th preseason game, I don't think they will be all that disappointed if it can't be played.

But by Oldschool's logic, if TT hates the turf he must really love the turf so he has no excuse for not allowing his team to play.

The best possible field should always be in place each year for this game.  Shameful.  EmbarrASSing.  Cheap.

No way they should play the game if the field isn't NFL ready.

UPDATE on field conditions in Canton - they'll go through pre-game, but game may become glorified practice because of field issues

Fans now being let into stadium, but both teams have gone back to locker rooms. We've had no updates in the press box to this point.

The paint that was applied today on middle of field, and in endzones, has congealed; would be like playing on tar. Game now doubtful.

As @NFL weighs what to do about tonight's game given the field conditions... if it's canceled there will be something. A fan fest perhaps

And if they do put a team out there tonight, who do they allow to play on that field?  Do they have enough players to avoid playing any starters?

But by Oldschool's logic, if TT hates the turf he must really love the turf so he has no excuse for not allowing his team to play.

You just blew my mind.

How in the hell can the NFL let this happen?!?!

Good lord.   Awful.  I wouldn't want my guys to play on that crap either.

One exec w/team in Canton called cancellation "a no brainer for player safety ... The 90th man (on roster) deserves it as much as the 1st."

How fitting is it that the game won't show up for Randy Moss's first day as a commentator?

Colts players tweeting that the game is cancelled and they will mingle and sign for fans.

Excellent. Thrilled to hear this game has been canceled. Five preseason games is pure bull****.

Lol... So much for a glorious start to the NFL season...

"Game canceled but will go out and talk to fans and sign things. Was juiced but safety is number 1."

What an embarrassment for the NFL.

Kinda fitting the HOF game is gonna happen... and then not... on the weekend Favre is inducted.

NFL cancels the Hall of Fame Game between the Colts and Packers due to poor field conditions on.si.com/2assH6K

BREAKING: The Colts-Packers Hall Of Fame Game has been cancelled due to field conditions. es.pn/2b5lqep

Here is a report and background on the new field testing protocols between the #NFL and #NFLPA : mmqb.si.com/mmqb/2016/07/2‚Ä¶

Well this sucks. I was psyched to see some Packer football!  I do understand and agree why, but how in the hell could they have NOT had a FIELD to play on?!?!?!

A Packers source said something is being planned for the fans in lieu of a game. http://es.pn/2aDV11i 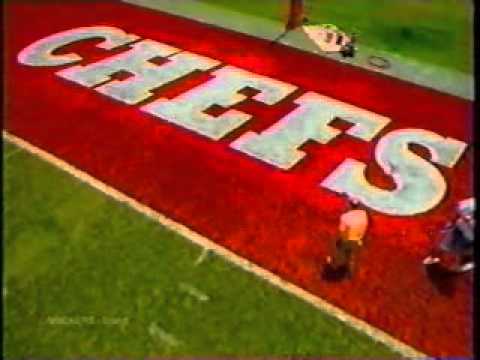 Can't even get a decent field to play on.  Thanks a lot, Brett!

I have no feelings about this game being cancelled